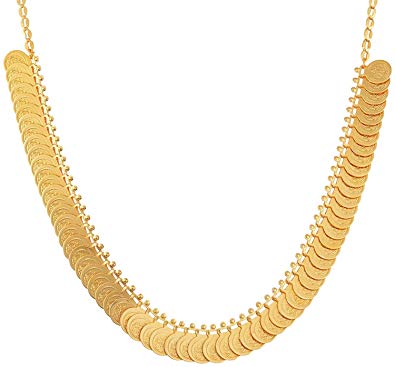 What Exactly Is A Kasu Mala?

The literal translation of a Kasu Mala would be Coin Necklace. It is a Malayalam word where Kasu means coins and Mala means a neck chain/necklace. The Mala is made using gold coins that strung together on a cord of gold. The gold coins are attached to each other in such a way that they overlap each other (a prominent feature in most of the designs).

This is popular in other parts of South India and is known as a Kasu Malai in Tamil and Kasulaperu in Telugu.

It is believed that one can trace back the origins of design to the Vedic Period and it has been mentioned in the Rig Veda. However, back then the necklace of gold coins was referred to as Nishka. According to historians, this necklace was also quite popular during the rule of Andhra Ikshvakus.

This traditional South Indian Gold jewellery is available in different styles. Each style has a different gold jewellery design and may or may not be inlaid with stones. The most popular styles are given below.

The Mala with the imprint of Ganesh Lakshmi and Ram Durbar are also popular choices.

Like any other type of traditional gold jewellery, the Kasu Mala has also undergone several changes in designs over the years. The following are some of the popular choices of designs available today.

The necklace is worn by women of all ages. This timeless classic is most of the time a part of the bridal jewellery in the traditional Hindu weddings held in Kerala and rest of South India. The length of the necklace and the design chosen could vary depending on the personal taste.

Traditional gold jewellery, as you already know, is made of pure gold. The mind-blowing craftsmanship and exotic designs are the main reasons behind the popularity of South Indian designs within the country and all over the world.